In the past decade there has been a dramatic spike in Tommy John surgeries in professional and amateur baseball. This surgery reconstructs the ligament on the inner side of the elbow. Between 1974 (when Tommy John had his operation) and the early 1990’s there were only a handful of these surgeries (see chart). Between 2003 and 2012 Tommy John procedures have dramatically spiked to an average of 35-44 per season in professional baseball (MLB organizations). 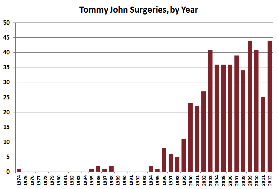 Many theories have been promoted to explain why this injury has spiked so dramatically over the past 10 years. These include poor preparation, poor mechanics, vigorous spring training routines, lingering issues from previous seasons, avoidance of the training room, too much throwing, too much pitching and so on. Although I don’t disagree that these are factors in injuries these variables have always existed. So why the huge spike in ulnar collateral ligament tears?

My professional opinion is that we need to look at what’s different between the eras. The game changed dramatically in the 1990’s as more intense weight training programs emerged and the steroid era began. Player’s were bulking up to sizes we had never seen in baseball. The joints and ligaments of the body can only take so much force before they blow. As well, the appetite for increased pitching velocity and the associated acceleration programs may be leading to more ligament injury. There may also be too much maximal throwing (ie. pitching, maximal long toss, etc.). Studies show that maximal effort throwing decreases arm strength over the season and as they say there are only so many bullets in the human arm. In addition, year round baseball never gives the arm recovery time.

I have a few ideas as to how we can better serve our youth baseball players. First, a more functional conditioning program that emphasizes power and incorporates full body movement (ie. medicine ball throws), as well as increased core and gluteal strengthening would better serve our young players than many traditional weight lifting postures. As well, preventative exercise programs for the rotator cuff, shoulder blade (scapula) muscles and elbow are vital. As far as throwing goes, my preference is for less maximal throwing and more submaximal throwing (including playing catch and submaximal long toss). This type of throwing takes a tremendous amount of stress off of the critical structures of the arm.

There are probably no easy answers but as the stats show it can’t get any worse.