If Tavares had a concussion why was he back skating so quickly? 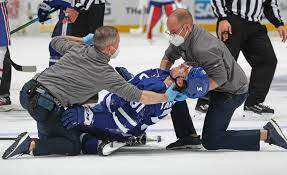 As a physiotherapist I field many varied questions from clients, so it was no surprise when I heard "can I ask you a question about concussions?", which was quickly followed by "how could the Leafs let Tavares get back on the ice so quickly?".  After I explained the rationale (see below), my client then said "since most people don't know this, parents and athletes are going to make the wrong decisions, so the Leafs need to do better to educate people". So I am going to save the Leafs some time and explain it for them.

As a lot of hockey fans may be aware, John Tavares was injured on May 20th in  game 1 of the NHL playoffs against Montreal, when Corey Perry's knee accidentally hit Tavares in the face as he was getting up from a body check. You can check out the video here on YouTube https://youtu.be/a37OvJykqlk (but it is quite disturbing).

After being taken of the ice on a stretcher and evaluated at a local hospital Tavares was released and diagnosed with a concussion (and knee injury, but that's a different story!). On May 27 Tavares was back on the ice skating, albeit on his own for 16 minutes. This was 1 week after the injury happened, hence the question of how could he be on the ice so quickly after a concussion.

For many years the treatment after a concussion was rest until symptoms were gone.  Research over the past few years has shown that this way is not the best way, and that in fact as Leddy at the University of Buffalo as well as other researchers have found, physical activity after a concussion actually helps the brain heal. But it is important to note as the 2017 Concussion in Sport group in the Berlin concensus statement indicated:

There is currently insufficient evidence that prescribing complete rest achieves these objectives. After a brief period of rest during the acute phase (24–48 hours) after injury, patients can be encouraged to become gradually and progressively more active while staying below their cognitive and physical symptom-exacerbation thresholds (ie, activity level should not bring on or worsen their symptoms). It is reasonable for athletes to avoid vigorous exertion while they are recovering. The exact amount and duration of rest is not yet well defined in the literature and requires further study.

Important in this definition is that activity does not equal sports and the activity should be performed at a level that does not worsen the concussion symptoms, hence John Tavares was back on the ice 1 week after the injury. Also important in this discussion was that Tavares, like most professional athletes, had the advantage of being closely supervised by a full medical team including Athletic Therapists, sports medicine doctors and probably neurologists as well. These are resources that most community and school based athletes do not have easy access to guide and closely monitor their return from a concussion injury! Also keep in mind that Tavares was skating on his own at an easy pace, and not doing drills with his team for 16 minutes. This followed the recommended protocols, plus gave the added bonus of having an injured athlete reconnect with his athletic abilities which can lessen the mental/ emotional strain, and in this case give a positive mental boost to his teammates who more than likely last saw him leaving the ice on a stretcher!

If Tavares was 12 years old instead, skating would be a much later activity as the risk of falling and hitting a very hard object at the rink can happen all to easily. Many a player has said to me "I won't fall", only to be reminded of how often they fall in a regular practice such as after "losing an edge". Walking, riding an exercise bike, or walking in a pool are all better first choices to be active to promote better concussion healing. John Tavares, the pro hockey player has different options and a very different level of supervision in his recovery.

As a physiotherapist working in the Concussion field, plus someone who has also spent many seasons working with sports teams on the sidelines at the hockey rink or field for lacrosse, rugby, soccer and football, how to safely return an injured athlete from a concussion is challenging and needs to be done with long term health and safety as the primary focus. Although our brains are pretty much the same whether you are a professional athlete or not, how someone navigates through the concussion recovery stages is very different, so in this case following what the pros do is not always the best method to follow for every case.